Ever since the first intended releases of GM, there have been discussions on the extent to which control of the spread of GMOs in the environment is possible. For example, the specific character of genetically modified rape means that in a natural environment it is capable of transferring genetically modified traits into related wild plants through outcrossing. This kind of spread in the environment is, however, generally not desirable. In fact, according to EC-Directive 2001/18 on the contained use of genetically modified organisms, the occurrence of genetically modified organisms should be restricted to the laboratory, to the experimental release area, or to certain agricultural production systems.
Recently, the areas of application of genetic engineering in agriculture have been extended, particularly in connection with the development of genetically modified insects. New concepts aiming at a dissemination of modified genetic information in natural populations (SPAGE) have been developed for applications of GM-insects. There are plans, for example, to release GM-olive flies in order to decimate natural populations (pest insects). To this end, genetic changes have been established in male flies causing female GM-offspring to die as larvae, while male offspring survive and spread their genotype further into natural populations.
Future applications include so-called gene drives intended for use in GM-plants and GM-animals. Gene drives can increase the frequency of inheritance of a trait beyond the normal probability of transmission to 50% of the offspring by additionally transferring the genetic change to the homologous chromosome during sexual reproduction.

A gene drive thus has the potential to change the characteristics of wild populations rapidly and completely. If a gene drive is completely transferred to the homologous chromosome, all descendants of GM organisms in subsequent generations are homozygous for the intended changes. As a result, the spread of an artificial genetic modification can be accelerated exponentially. This will take SPAGE technologies to a whole new level. Besides being very efficient at spreading genetic changes, gene drives facilitate the transmission of a genetically engineered trait from generation to generation even if the trait is disadvantageous for survival. Gene drives using so-called genetic scissors based on the molecular biology tool CRISPR-Cas are particularly effective and have been very successful in the field of genome editing in recent years. 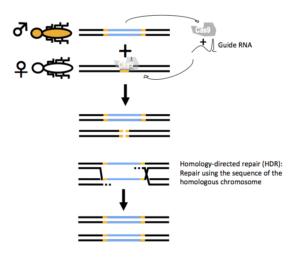 Gene drive mechanism based on CRISPR-Cas.

The GeneTip project will investigate the impact of self-propagating artificial genetic elements (SPAGE) through technology characterization and hazard and vulnerability analysis of gene drives, looking at, in particular, GM-rapeseed and GM-olive flies as carriers of SPAGE. The deliberate and particularly effective propagation of artificial genetic changes through SPAGE will inevitably lead to a new stage of intervention into natural ecosystems at a depth previously unknown.
The GeneTip investigations will be particularly concerned with the identification of so-called tipping points. Tipping points represent transition phases in which a system passes into a different state. Thus, due to rapid change (up to the elimination of whole populations) irreversible tipping processes could be triggered in the dynamics of complex socio-ecological systems.
Relevant systems within the scope of GeneTip are